ABOUT 15 YEARS AGO, WHEN I GOT MY SECOND INTERNATIONAL T-9 SWING CRANE CAT WHICH BECAME THE "FAMOUS BLACK CAT", HE WAS SEIZED. SO TRYING TO GET HIM UN-SEIZED, THE BIG PRY BAR  SLIPPED A COUPLE OF TIMES AND SCUFFED THE HAIR OFF OF MY KNUCKLES. SO I BUILT THE "BAR STARTER" IN REVENGE OF THOSE PRY BARS THAT HURT SO MUCH. LOOKING BACK, THIS SIMPLE DESIGN THAT TOOK LESS THEN 1/2 HOUR TO MAKE HAS BEEN USED LOTS OVER THE YEARS AND HAS SAVED MY KNUCKLE HAIRS TOO. I ENJOY SHARING THIS "BAR STARTER" WHICH I MADE TO MAKE MY LIFE EASIER IN THE GREAT WHITE NORTH. SO PLEASE ENJOY AND MAKE YOUR "BAR STARTER" FOR HOURS OF KNUCKLE FREE PAIN, LOL. 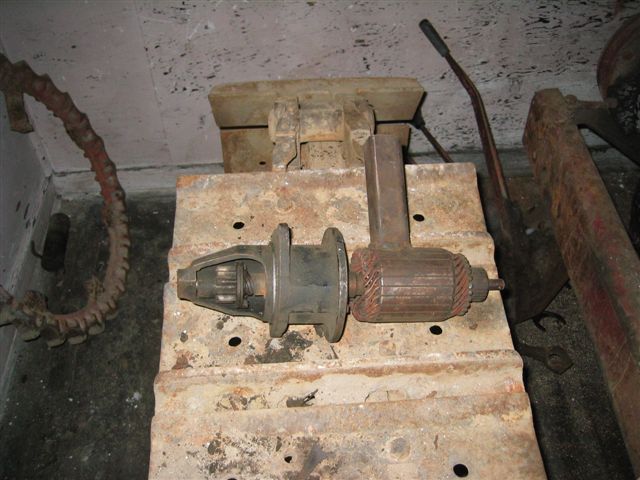 TAKE YOUR STARTER AND WELD THE BENDIX IN THE OUT POSITION. THEN WELD A SHORT PIPE OR SQUARE TUBING ON THE ARMATURE. WELD IT GOOD BECAUSE THE COPPER AND COATINGS WILL EFFECT YOU WELD STRENGTH. 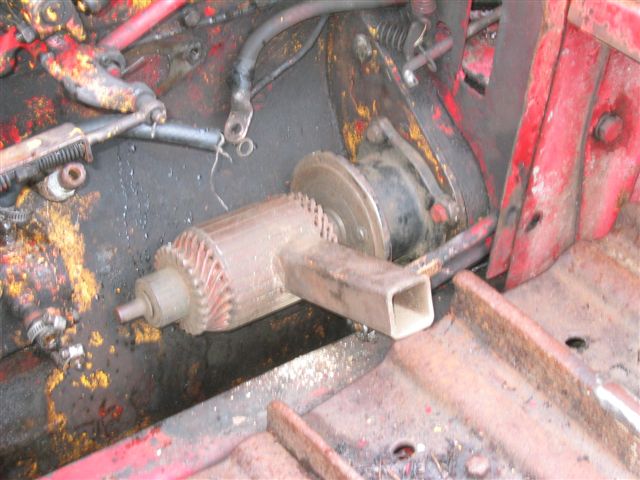 THIS IS THE "BAR STARTER" ON THE TD-6 KNOWN AS "KOMMUNIST KAT".

IN 2012 I PAINTED THE BAR STARTER TO MAKE IT LOOK GOOD, LOL.

in the summer of 2017 i took the month of august to work on the cats as a form of relaxation. the Bar Starter that i whipped up in 1987 to do a 10 minute got used to unseize 3 of the 5 motors that month.

this td-6 with a serial number of 920 which one of the first ones ever produced didn't take long to get unseized. note that i splashed yellow paint on the Bar Starter to make it look good in the pictures.

then i found out that a td-6 to td-9 starter does not work on a ud-16 motor in the adams grader. no problem just whip up another Bar Starter from a parts starter.

once the engine breaks free, the bolts are removed and couple of studs screwed in to make it quicker in re-setting the Bar Starter for doing a complete rotation of the motor.

the 2 Bar Starters in the Kingdom which are made 30 years apart.

of course you always get the one motor that won't break free. so the mini Hoe is holding the motor, the ratchet strap is pulling down on the Bar Starter and i'm hitting the wood block in the cylinder hole with a 20lb sledge hammer. working smarter not harder.

the engine broke free but the Bar Starter finally broke after 30 years of use and saved numerous seized engines. the great debate over the Bar Starter was the fact i used an AC welder to weld the stub tubing on to the copper winding filled armature. there is enough steel in the armature to be able to weld the stub tubing on. the weakest point of the whole starter is the bendix and that is where it broke. one can do the math on how much pressure was being applied when you pull down on the 6 foot long pipe and the non supported end of the BAr Starter was moving up almost a half an inch.

after 30 years i whipped up another Bar Starter with lots of improvements.

i'm colour blind so when i splash the paint around i sometimes don't know what the colour is until someone tells me. but the replacement starter looks good and works good too.